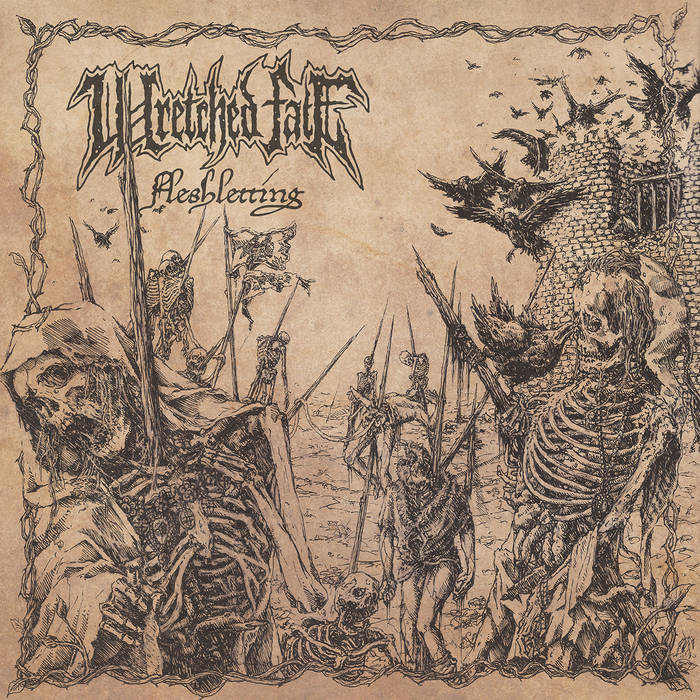 minusoneman2 Yes! Swedish Death Metal the brutal way. If you’re into earlier Bloodbath and Vomitory or Cut up this will fit into your collection. Don’t worry, these guys do their own thing. No Copycat bullshit.

Tameem_Diabhal This album as a whole is one of the strongest pieces of death metal I’ve heard in a long time. Insane guitar and bass tones, fantastic vocals and ridiculous drums, the high end buzzsaw tone really sells this. Love the synths, not something I’m into normally but this band pulls it off 100% the songs have a strong old school vibe to them while maintaining a fresh new atmosphere. Only disappointment here is that it took me so long to find these guys. 10/10 for me Favorite track: Fear Expulsion.
more...

"Bands like Wretched Fate and labels like Redefining Darkness remind me why I love death metal. Brutal, underground and willing to go for the throat, Wretched Fate is the sort of band who speak to the sort of inherent darkness of the genre."
- Metal Injection
www.metalinjection.net/av/new-music/get-bloody-with-wretched-fates-horror-inspired-death-thrash

"Swedish death metal unit Wretched Fate were inspired by a sense of nostalgia for the past, specifically the glory days of bands like Entombed and Dismember. Rooted in crunchy HM-2-driven bludgeoning, their debut Fleshletting is equal parts primitive and sophisticated. Songs like “Only Death to Abide” showcase that duality perfectly, combining caveman-like riffing with melodic leads and guitar solos, Wretched Fate achieve a sense of balance. The primitive aspects of the music are highlighted because of the melodies and the melodies stand out that much more on such a brutal backdrop.
- Decibel Magazine
www.decibelmagazine.com/2019/02/18/track-premiere-wretched-fate-only-death-to-abide/

"...it’s a disgusting anomaly that will confront you with the dark reality in which you live. Per usual, the connoisseurs of all things unholy at Redefining Darkness have once again, graced us with another putrid release."
- CVLT NATION
www.cvltnation.com/listen-to-the-unholy-sounds-of-wretched-fates-fleshletting/

"Sweden's Wretched Fate were inspired to contribute to their country's storied (death) metal tradition after reading tomes on the topic and, on Fleshletting, ensure they're more than just a footnote. Like Bloodbath before them, the goal is tributary and the self-awareness does them well, as the metal ain't muddled in attempts at indulgent innovation."
- Exclaim!
exclaim.ca/music/article/wretched_fate-fleshletting

"While straightforward numbers like the eponymous opener “Wretched Fate” or the Vomitory-esque “Heading for Beheading” waste no time in flattening the listener, things become a bit more refined soon enough. “Altars of Misery” is the first track to introduce some synthwork, and it’s in this aspect that the band’s individuality shines through the most. The chorals in “Fear Expulsion”, the samples in “Taker of Souls”, and the dark atmosphere they successfully build in more expansive numbers like “Epitaph” or the title track are testament of Mats Andersson’s soft spot for horror movies, which provides a backbone to the album that is subtle enough not to come off gimmicky or alienate purists, but strong enough to make the band stand out and provide freshness to what might otherwise have become a rather stale, if still adept, offering. As it is, this individual note makes the whole thing much more compelling, and currently has me coming back frequently."
- Toilet Ov Hell
toiletovhell.com/double-dose-of-darkness-wretched-fate-zohamah/

"This is the sort of Swedish death metal that understands the full scope of the genre but also brings so much to the table. It has a sound that is powerful and brutal, over the top and fast, endlessly addictive and a testament to the face melting magic that the power of raw riffs can bring to the table. Chaotic and borderline terrifying, Wretched Fate have unveiled something truly next level."
- Sir Matt Bacon, Two Guys Metal Reviews
www.twoguysmetalreviews.com/2019/01/wretched-fate-fleshletting.html

"..particularly in the case of old school Swedish death metal, there’s not much you can do to vary the sound without breaking the chain that links the music to its origins.
The Swedish band Wretched Fate, on the other hand, really have found a sweet spot, indulging a genuine passion for death metal of the past, but in a way that doesn’t sound formulaic. They’ve undeniably caught the sound and spirit of the giants on whose shoulders they stand, but have injected their songs with a fieriness and flair that we rarely encounter in the music of groups whose inspirations are so firmly rooted in an era that’s now nearly three decades old."
- NO CLEAN SINGING
www.nocleansinging.com/2019/01/15/an-ncs-premiere-wretched-fate-wretched-fate/

"The four young Swedes offer a dozen of monstrous old school death metal compositions that will have most old school death metal fans mouth-watering. Fat sounding HM-2 riffage, aggressive drums and screeching solos blow through my speakers here and I cannot stop headbanging while listening to the tunes of Fleshletting! This simply sounds awesome!"
- Lords of Metal
www.lordsofmetal.nl/en/reviews/view/id/38436

"Not only is this a gruesome display of razor-sharp death metal as each song individually could be a single, but as an album itself, it’s ALMOST overwhelming. Seriously, it’s twelve FULL songs. All killer and absolutely no filler....A truly flawless and unique death metal release that lies somewhere in a grave in-between the best old school death metal, the most vile and evil blackened death metal, and some of the most captivating melodic stuff. This is the new album Morbid Angel WISH they wrote. "
- Death Comes Lifting
www.deathcomeslifting.com/wretched-fate-flesh-letting-2019-review-redefining-darkness-records/

Wretched Fate initially began in Dalarna, Sweden, as a two-man project in 2016, involving Mats Andersson (Guitar) and Adrian Selmani (Vocals). While missing the Swedish Death Metal "heyday" due to their age, books like "Swedish Death Metal" and "Blood Fire Death" fueled the duo's collective passion and enthusiasm alongside Mats fascination with horror movies of the 70's and 80's. These influences would become the cornerstone of what Wretched Fate has come to represent.

Soon after recording the first tracks of what would become Wretched Fate's debut album "Fleshletting", Robin Magnusson (Bass) of Incised caught interest in the project. With Mats and Adrian's desire to turn Wretched Fate into a full-time band, Robin as well as Incised drummer Samuel Karlstrand were added to the line-up.

Feeling that much of modern metal is formulaic, bland, and down right boring, Wretched Fate wanted to revive the greatness and restless energy found in Death Metal of the past and combine it with something bold and new - we believe the band have achieved this in spades on their debut album, "Fleshletting"!

Wretched Fate are pushing the boundaries of modern Death Metal to the brink with musical ability, pure ferocity, and a genuine honoring of all that has come before them. This debut is going to leave listener's absolutely flabbergasted!!

For fans of Bloodbath, Entrails, Aeon, and Cannibal Corpse - prepare to be stunned!

Bandcamp Daily  your guide to the world of Bandcamp

Benji B talks about his new compilation ‘Deviation Classics’